Sustainability up close and personal

For most consumers sustainability can too often be an abstract concept. Out of sight out of mind, right? In most cases we, as consumers don’t know and definitely can’t see where our clothes come from. How can you be sure the t-shirt you are buying meets your personal standards and desires for sustainability?

You know there is so much more to a sustainable product than just the quality of its materials. The final product comes from a long chain of farmers or chemistry mills, manufacturers, distributers, shipping centers, amongst others. All these links work together to make sure that we get our t-shirts, our pants, our entire outfits. The issue is, however, that the longer that chain stretches, the more links it contains, the harder it is to ensure that every piece meets your requirements for sustainability.

Imagine that the chain, which brought you your clothes stretched for a few blocks instead of a few countries, went in one straight line for a few Kilometers instead of through convoluted turns and directions spanning continents.

These were, these are, the thoughts of Michael Spitzbarth. The dreams which founded a fashion brand, which propelled Bleed clothing to its newest idealistic venture: the founding of its flagship store which will exclusively offer a pair of GOTS certified organic cotton pants manufactured just 2 Kilometers down the road. Its goal is to allow customers to see sustainability up close and in action. To highlight it, transform it from an abstract idea into a concrete and tangible foundation.

After finishing his degree in textile studies, Michael Spitzbarth was somewhat at a loss for a direction to follow. So naturally he sat down and spoke with his Grandma. Her request that he do something meaningful with his life sparked a desire to create something special.

Two years working in the textile industry, throughout various production chains, drove him to reach an insightful realisation: textiles were produced for the outdoor industry; for those who loved and wanted to spend time in nature, however, their production simultaneously destroyed the very nature their users loved.

Michael simply wasn’t satisfied with the state of the industry. He wouldn’t be until he could dress himself, head-to-toe, without any feelings of guilt about what he was wearing. It was time to take the situation into his own hands.

A rocky road ahead

Bleed’s first official collection was made up of 20 items, a mix of organic cotton t-shirts and hoodies. Back then, those items were the easiest to come by with a certain degree of sustainability. The more complex items came later.

As with any startup, the initial few years held many challenges, and Michael did his research to try and handle the struggles. “Of course I read Yvon Chouinard’s ‘Let my People go Surfing’, but Patagonia is, and always will be, an outdoor brand”, Bleed on the other hand was not. “With body and soul I am a skater”, says Michael. There was no previous brand comparable to Bleed. Almost all other sustainability-focused brands were primarily ‘outdoor’ brands.

The greatest struggle was selling in enough quantities to find production sites. Most production sites will only start sewing for 1000 piece orders and more. “I pulled it through with jeans though – 2500!”, exclaims Michael. “To see that much cloth in person, it really blows you away”. He laughs, “the double garage in my parents house was full!”. Yet, Michael managed to sell all the jeans in the same year.

The startup was extremely risky. With only 10-20 dealers, Bleed had a very limited amount of sales channels. If some of those channels closed, the adventure would be over. “The first 2-3 years were hell on earth with existential fears omnipresent”, claims Michael; “I think that only people who have gone through the same experience can understand. There was a lot of self-doubt those first few years. I’d constantly ask myself ‘what kind of hell have I gotten myself into?’ Honestly, I’m happy I came into the industry so blindly and naive, and didn’t know what I was getting myself into.”

The banking crisis of 2008 hit Bleed hard. The money faucet supporting its growth was unceremoniously cut off. The banks stopped giving out loans so Michael turned his attention to investors. Though, he quickly realised equity investment was not the way to move forward. Money came with strings attached, strings controlled by those primarily focused on economic gains, which inevitably would mean a sacrifice in sustainability. “I wanted to keep the decision making 100% in my hands” states Michael, “that was the whole reason Bleed was founded in the first place”. Eventually when the night was darkest the bank pulled together and allowed Bleed to bourgeon into what it is today. 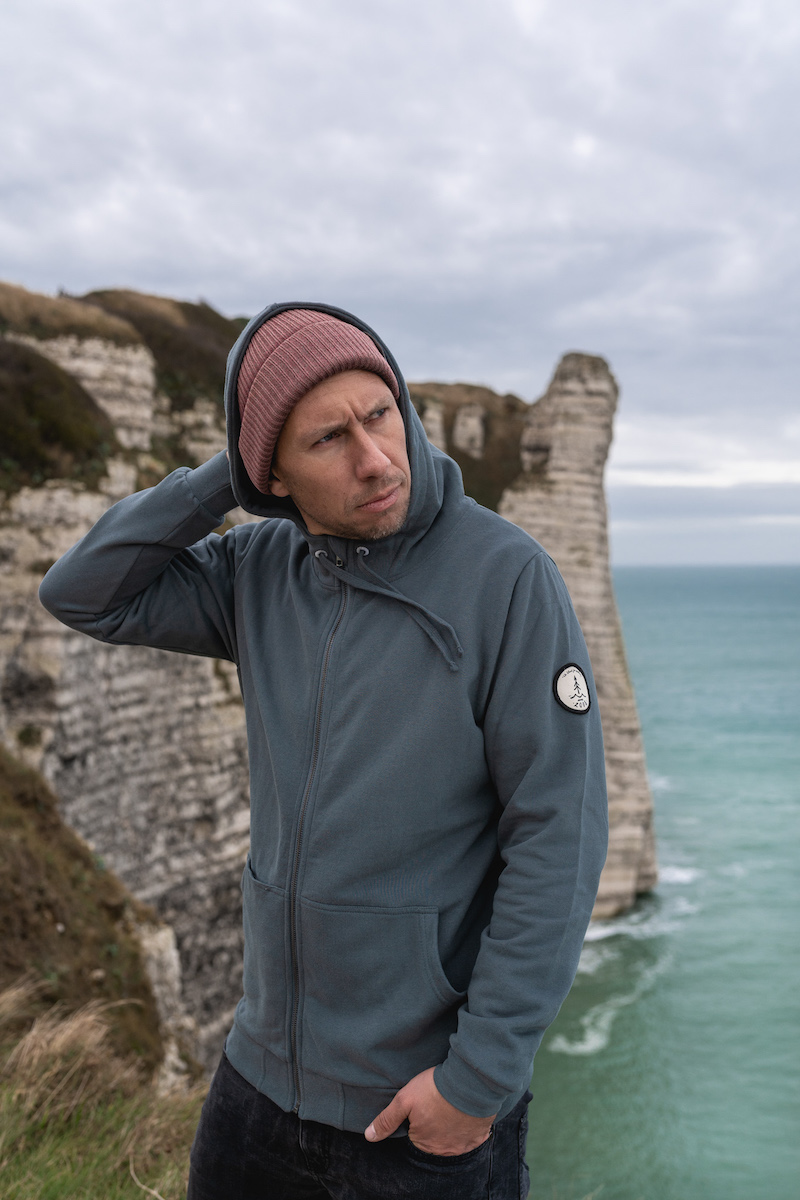 Piecing together his outfit

Since the beginning Michael remembered what had driven him to found Bleed in the first place: to wear an entire outfit with a good conscience about its sustainability. Every few years he added a new item to Bleed’s collection with some interesting campaigns along the way.

In 2012, the “I can dance my name” T-shirt collection was released. It was inspired by Michael’s youth in a Waldorf school, especially his ‘Eurythmy’ dance class. During these dance sessions the students learned to ‘dance’ their names. The collection served as an ode to Michael’s childhood and his alternative schooling upbringing.

Two years later Bleed, with the help of crowd funding, developed and sold a jacket made of cork. The jacket’s release coincided with the development of the vegan movement, with cork offering a possible alternative to leather. Although the cork material proved to be lacking in its durability, the jacket served as a symbol of Bleed’s spirit. That even if certain ideas or products may not seem feasible from a production standpoint, Bleed would continue taking risks and trying out new methods of sustainable development, more so as a tool of communication and inspiration than as a means to make money.

Bleed’s first outdoor jacket was released in 2017, with the goal to be 100% carbon neutral. Calculating the CO2 cost from production and transportation, Bleed – with the help of ClimatePartner – compensates for all the CO2 released by supporting the protection and rejuvenation of a forest in Kenya, which also happens to serve as a crucial wildlife migratory channel! The jacket uses SympaTex (a partner of Bleed’s) material which is a human and environmentally friendly product.

The following year, Bleed released its swimwear collection. As someone who “wears board-shorts to nearly every occasion”, Michael felt very personally about the collection. An issue which many companies face when delving into swimwear is that many units must be ordered to make it worth the manufacturers time, as there is so little material in one article. Thankfully, Michael found a supplier in Italy who is able to recycle old fishing nets into nylon which is subsequently used to manufacture Bleed’s swimwear line.

After 3-4 years of development, 2019 saw the production of Bleed’s climate neutral shoe. The most difficult project so far, the shoe consists of over 40 parts, which needed to be assembled in a production facility which focuses on ethical work conditions while still being reliable and willing to work with small quantities. Such a facility was eventually found in Portugal, an ideal location as it provides a short transport distance to Germany. The search for inputs was focused around short transportation and recycled materials. The shoes calculated CO2 output is 3kg compared to an average of 16-20kg for other shoes. The 3kg are compensated for with ClimatePartner’s help. Crowdfunding supported the shoe project and it has become clear that this is the first sustainable shoe available in large sizes, up to 48 EU.

Once the shoes release to the public in July 2019, Michael will have finally completed his goal: wear an entire outfit without a bad conscience about sustainability. In fact Michael is so dedicated to his goal that the only piece of clothing he own which isn’t from Bleed are a pair of snowboard pants he has owned for 20 years!

On what Bleed stands for, what it really is, Michael says this:

“For me its all about showing what is possible, how far can one go in terms of sustainability…even if your margins go down. What’s important for me is to communicate what you can get out of the textile supply chain. We sell too little to be financially well-positioned, but primarily I see Bleed as a communication medium and educational platform. Fashion is a lifestyle, and therefor a really cool communications tool.”